‘SCHOOLS IN ACTION FOR DAYLIGHTING RIVERS’

Out of the 16 teams registered to the competition, we sincerely thank and appreciate the efforts of the 6 final competing teams that hardly worked to participate in the competition in such difficult situation due to the restrictive measures to contain the COVID-19 pandemic.

According to the rules to participate in the competition as described in the announcement, the teams were committed to produce a report on the river regeneration design project in its wider meaning, not only referring to physical daylighting of rivers but also to the discover of the local river to know its ecosystem and threats; and a Location Based Game in which the gained scientific language was translated into a fantasy story to play on a mobile device from home or at the locations.

All the products were valuable and deep in contents and ecological awareness.

The evaluation was made by a jury of 4 members from 4 countries (Israel, Italy, Greece and Turkey) who assessed different aspects of the report (e.g. clarity of the objective, complexity of the scientific investigation, originality, depth of the arguments and communication) and of the Location Based Game (e.g. creativity, originality of storytelling, learning value).

The competing projects were presented at the Session of the Competition “School in Action for Daylighting Rivers” at the International conference “Daylighting Rivers: Inquiry Based Learning for civic ecology” on the 2nd of December 2020, ending with the Prize Award Ceremony.

Title of the project: PIT AND PISTOIA RIVERS

The game is about the story of Pit who has to find solutions to several ecological issues threatening the rivers of Pistoia (a town in Tuscany – central Italy). He will succeed only if you help him answering correctly to some questions that will provide him the right tools to achieve his objective.

Title of the project: THE GREAT STREAM OF RAFINA

(which includes also a poem made by students in three languages: English, Italian and Spanish)

To play the game, install Taleblazer App on your mobile and search for the game code gxtmicf

More information about the game platform on Taleblazer

The game is a walk along the Great Stream of Rafina (a town on the eastern coast of Attica in Greece) with videos and photos and storytelling about the environmental richness but also the human impacts and projects that are threatening the beauty and the functions of the river.

Title of the project: ANCIENT SPRINGS

To play the game, create an account in Quizwhizzer and login in. Search for the game code 48177

The game is a challenging series of quiz and information about the historical town of San Miniato (a village in Tuscany, central Italy) which is also on the Francigena route (the route to Rome described by the Archbishop Sigeric of Canterbury – AD ca. 990) and its rich presence of springs and fountains that are located in various locations. Many water springs were used in the past and protected by artifacts although over the years some have been abandoned.

Project presentation at the Ceremony

The project aims to make people aware of the dangers that threaten rivers and nature, with a special focus on culverting. The report describes step by step the students’ design project to uncover the Alveo Comune Nocerino river in Nocera Inferiore (a town in the south of Italy) that will be submitted to the municipality.

Title of the project: DORIA RIPARIA

The project and the game aim to raise people awareness about the transformation of the Dora Riparia river in Turin from the middle ages to nowadays and its functions and environmental problems in relation to the biggest iron industry in Italy that developed next to the river. However, you can also know more about the municipal project that uncovered the culverted part and transformed the area into a park.

Title of the project: LANDING ON ELSA RIVER

Create an account in Quizwhizzer and login in. Search for the game code 88521

The game is about the story of an alien landed in the area of the Elsa river, near San Miniato (a village in Tuscany, central Italy) that will be guided by the player along the river to know it and the human threats. 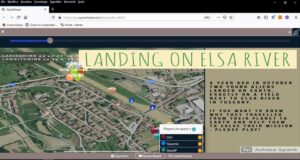